When I openened a twitter account a few months ago, it wasn’t difficult to find the phrase that best captures me: “Born in the wrong century, a would-be salonnière.” Ever since college, when I first learned about Marquise de Rambouillet–the refined hostess who led the most talented artists and writers of her day in scintillating intellectual discussions in the elegant alcove of her drawing room–I knew that I had missed my opportunity and true calling in life. Sure, women may be able to be and do whatever they want today. Society is less sexist, more democratic. But in an era when entertainment news outdoes even socio-political news in popularity and readership, what hope is there for placing art, literature and philosophy at the center of public attention again? 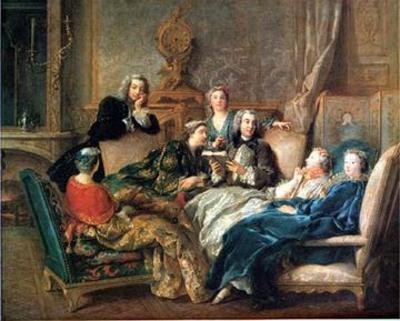 The main problem I encountered in being a contemporary salonnière was: Where are the salons? Most academic discourse struck me as too technical and specialized to draw a large audience. Fortunately, while an undergraduate at Princeton University, I had the enormous privilege to study with scholars who epitomized the salon tradition of worldly intellectuals: Professor Robert Fagles, translator of Homer’s epic poems, and Professor Victor Brombert,  a regular contributor to The New York Review of Books, who encouraged my love for world literature and culture to the point where I decided to pursue Comparative Literature for both my undergraduate and graduate studies. Many years later, I discovered quite a number of online salons, where writers, artists and intellectuals converge to discuss their works, in a clear, interesting and sophisticated fashion. I’d like to share with you some of my favorite contemporary salons.

Litkicks.com. I discovered Litkicks ( http://www.litkicks.com/) in October 2009, when I found on the internet an article about a fellow Romanian-born writer, Herta Müller. The article was called “Herta Who?” by Dedi Felman and it was about the dissident writer’s recently awarded Nobel Prize in Literature. At that point, the founder of Litkicks, Levi Asher, also wrote a brief note on the blog about my recently published novel on similar themes, Velvet Totalitarianism, 2009/Intre Doua Lumi, 2011. We got in touch by email and I became a regular reader and occasional contributor on the blog. Litkicks features articles on literature, poetry, art, philosophy, music, cinema and politics.

Levi was a software developer (and culture lover) on Wall Street when he started Litkicks.com in 1994, which became, along with Salon.com, a pioneer culture blog. The website was originally launched to support Beat Generation poetry and experimental fiction. Over the years, it has expanded its scope to include contemporary literature in general, essays on nineteenth and twentieth-century French poetry and fiction (including Michael Norris‘s excellent essays on Proust), lively political articles, and Levi’s top-notch Philosophy Series. Litkicks includes articles on established authors published by the big publishing houses as well as reviews about talented independent writers published by smaller presses. The blog has thousands of readers a day, but thanks to a loyal following of regular contributors and commentators, it retains the intimate feel of a community of friends engaged in intellectual discussions and debates.

Catchy.ro. Founded in 2010 by the Romanian journalist Mihaela Carlan, Catchy.ro (http://www.catchy.ro/) is quickly catching on as Romania’s premier blog. Discussing all aspects of art, entertainment, politics and culture, Catchy.ro is inspired by the highly successful The Huffington Post, founded by Arianna Huffington in 2005 and recently acquired by AOL for a whopping 315 million dollars. Part of The Huffington Post‘s enormous success stems from Arianna Huffington’s pull and connections with wealthy investors. To offer just one notable example, in August 2006, SoftBank Capital invested 5 milliion dollars in the company. However, its success can also be attributed to the high quality of its articles and the popularity of its over 9000 contributors. Without question, The Huffington Post gathered some of the best bloggers in every field it features. Moreover, the blog has not merely adapted, but also stayed one step ahead of the curve in its use of technology, recently introducing “vlogging“–or video blogging–which is taking off and making journalism even more multimedia and interactive.

If I mention Catchy’s precursor in some detail, it’s because I believe these are also some of the features that have helped the Romanian blog grow so quickly during the past year, since its inception. Catchy “like a woman” targets primarily a female audience. But ultimately its panel of excellent journalists–with expertise ranging from art, to literature, to philosophy, to music, to fashion to pop culture and, above all, to the most fundamental aspects of human life itself, like health, love and marriage–draws a much broader audience of both genders and every age group. Like The Huffington Post, Catchy.ro also treads perfectly the line between intellectual writing and pop culture, providing intelligently written articles for a general audience. As some of the more traditional Romanian newspapers have struggled and a few even collapsed, the up-and-coming blog Catchy.ro shows that in every country adaptation is the key to success.

Agonia.net.  Started by the technology expert and culture promoter Radu Herinean in 2010, Agonia.net (http://english.agonia.net/index.php) is a rapidly expanding international literary blog. It includes sections on prose, screenplays, poetry, criticism and essays. Agonia.net has the following assets: a) it publishes well-regarded writers and intellectuals, b) it’s contributor-run so that it can grow exponentially and internationally (with sections in English, French, Spanish, Romanian and several other languages in the works) and c) it has a team of great editors that monitor its posts and maintain high quality standards. Agonia. net improves upon the model of online creative writing publishing pioneered by websites like Wattpad.com, which are contributor-run but have no editorial monitoring. Because of lack of editorial control, Wattpad.com has not been taken seriously by readers and publishers despite its vast popularity with contributors. Any literary blog that has a chance at being successful has to have the capacity for handling a large number of incoming contributions while also maintaining reliable editorial standards. Agonia.net seems to have mastered this delicate balance.

In participating in these exciting artistic, literary and intellectual forums, I’m starting to feel like my calling as a 21st century salonnière might not be an anachronism after all. I invite you to explore each of them and see which ones fit your talents and interests best.